White supremacy maintains itself by using Black bodies to push and reinforce its ideals.

If Black American bodies -- bodies that have endured some of the most egregious abuses in history -- can be used to delegitimize struggles for liberation, then white supremacists can make claims that oppression no longer exists. The interconnectedness of struggles for liberation around the globe can be separated when/if white supremacy can weaponize the identities of people who have been at the crux of global domination. The term “black-on-black crime” has been used to demonize and delegitimize the Black Liberation Movement. While the harm Black individuals encounter during daily survival are frequently used to justify the flawed concept of “black-on-black crime,” the audacious nature of white supremacy to use Black bodies to further an agenda for systemic eradication [of people and total movements] is the true “black-on-black crime”, in that Black bodies become agents of the machine -- white supremacy.

Black people have been the moral compass in regards to political and social issues in America since the beginning of Black existence here.

Such a machine constructs institutions like the American Israel Public Affairs Committee (AIPAC), which is the most powerful pro-Israel lobbying group on Capitol Hill. Its biggest role is to ensure the funding of the gradual genocide of the Palestinian people. What is not well-known is how AIPAC has recently recruited Black politicians and students from Historically Black Colleges and Universities in an effort to collude with the ongoing domination of the Palestinian people. I, too, have been asked to sit on this side of the table–the side that is recruited so AIPAC can reach its Black quota and push its political agenda. However, once I made it clear that I fully supported liberation for Palestinian people, I received a phone call from a Black employee disinviting me from last year’s AIPAC Conference. Through this experience and the more recent event (read: drafting) of Bakari Sellers and fifty-nine other Black politicians signing a letter to undermine Cornel West’s attempt to endorse Palestinian freedom, the conclusion can be made that Black bodies are only useful when needed to undermine the struggle for freedom. Cornel West is not alone in the commitment to Palestine’s liberation. This fidelity has been a long-standing relationship with Black radical tradition; wherein Black radical thinkers and leaders have not only faced opposition from White bodies but from Black bodies at the behest of white supremacy. [caption id="attachment_2210" align="aligncenter" width="1024"] 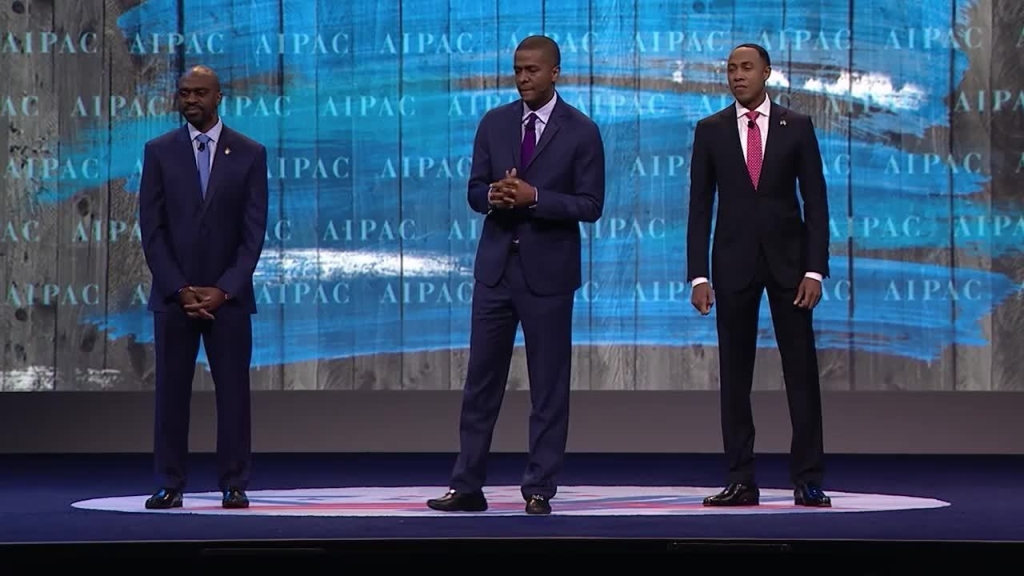 Ashley Bell, Bakari Sellers, and Michael Blake at AIPAC Policy Conference[/caption] On June 21, Bakari Sellers, a member of AIPAC's national council, wrote a letter to the co-chairs of the Democratic Party's platform committee. Signed by sixty Black politicians, the letter urges those writing the party's general election platform to maintain its pretentious pro-Israel rhetoric. The letter supports Israel's claims to Jerusalem, calls for a tough line on Iran, and condemns the Palestinian-led boycott, divestment, and sanctions (BDS) movement as "anti-Semitism." It was irrefutably a direct response to Cornel West, whose calls for the party to support Palestinian rights challenged a long-established status quo. In direct opposition to West’s support for BDS and total Palestinian liberation, Bakari Sellers offered the quintessential pro-Israel rhetoric infused with monstrous statements made by Hillary Clinton insisting that the Democratic platform makes its “unwavering” support for Israel very clear.

We see that white supremacy requires anti-blackness to be clothed in black face (read: drag) in order to maintain itself.

Sellers and many other Black politicians and political leaders have been called by AIPAC to serve as political representatives of Black pro-Israel bombast. In his letter, Seller emphasizes that Clinton, as First Lady, US Senator, Secretary of State and then a presidential candidate, "has long understood and nurtured America’s ties with Israel." He quotes her saying that "the alliance between our two nations transcends politics" and that the US and Israel "are both nations built by immigrants and exiles seeking to live and worship freedom, nations built on principles of equality, tolerance, and pluralism.” Sellers also echoed Israel's pinkwashing -- the presenting of a state as queer-friendly in order to dismiss its violent reputation -- propaganda, presenting it as a beacon of LGBTQIA+ rights and feminism. White supremacist tools like Sellers don’t only exist in the dark halls of DC; they also exist in the seats that hold power over our cities. Peachtree-Pine is the largest homeless shelter in the southeast region, housing hundreds of people a night. Some of Atlanta’s oldest neighborhoods are those surrounding Turner Field: Summerhill, Mechanicsville, Peoplestown, Pittsburgh, and Grant Park. So it is a wonder, with sixty-seven percent of Atlanta’s council being Black, serving under a Black mayor, why the council (specifically Kwanza Hall) would introduce an ordinance to shut down Peachtree-Pine and build a police precinct in its place; and why the city would sell Turner Field to Georgia State University without a Community Benefits Agreement (CBA), thusly displacing the Black residents surrounding the stadium. From City Council meetings being shut down to the ongoing fight against gentrification through #TentCityATL -- made indefinite after the March Against Gentrification -- residents have made it a point to resist white supremacist policies even and especially when they are being pushed by Black politicians. [caption id="attachment_2213" align="aligncenter" width="787"]

2010 Protest against closure of Peachtree Pine homeless shelter, Atlanta[/caption] We can pinpoint various eras in American history where politicians took legal steps to heighten police presence in Black communities, but policing in America traces back all the way to slavery. More specifically, in 2015, under the leadership of Atlanta’s now-retired Black police chief, George Turner, the Atlanta Police Department (APD) received “counter-terrorism” training through the Georgia International Law Enforcement Exchange (GILEE), which trains APD’s officers in Apartheid Israel; in 2016, Solutions Not Punishment Collaborative (SNaPCO) released a report on the profiling of and sexual violence against Black trans people by APD; and it has been reported that APD over-polices low-income, minority neighborhoods. In this, we see Black leaders not only conspiring with the violence done against people in the State of Palestine but also against Black bodies in America. We see that white supremacy requires anti-blackness to be clothed in black face (read: drag) in order to maintain itself. It freely uses Black identities to justify its oppressive and murderous actions. So much so that it quite literally sanctions the passing on of white supremacist tactics to Black existence in order to heavily police, rape, and murder Black folk. Bakari Sellers is the son of Cleveland Sellers, a [leading] member of the Student Nonviolent Coordinating Committee (SNCC) in the 1960s. Like Martin Luther King Jr., the elder Sellers is also a graduate of Morehouse College, which has a legacy of educating and training legendary civil rights activists in the “art” of civil disobedience as it pertains to anti-blackness, racism, and other injustices. That is to point out this: white supremacy will use the identities of those who have come from a long history of shackles, righteous anger, and grit as an attempt to take away from the validity of global struggles for freedom. As stated by Marc Lamont Hill, an esteemed author, activist, and professor of African American Studies at Morehouse College, Black people have "always been the vanguard of social justice struggles in America." Black people have been the moral compass in regards to political and social issues in America since the beginning of Black existence here. So, from the call to “diversify police departments”, to the signing of the letter by Bakari Sellers and fifty-nine other Black politicians. From the introducing of an ordinance to close down the largest homeless shelter in the southeast region to the gentrification of several Black neighborhoods. If white supremacy can recruit and weaponize Black American people to advocate for and push its policies, it can undermine the importance of the Black Liberation Movement and create what is ultimately the only and real black-on-black crime.
Sale
View full details →